I hope you like all of the DIY Christmas ornaments that I’ve been sharing because I’ve got another cute one for you today!  It’s Austin’s first Christmas, so I had an idea to make an ornament out of one of his tiny little socks.  Sounds weird, I know, but it turned out so nice!  I’m really wishing that I saved all of the other kids’ socks now!  Do you think they would find out if I bought new socks to make some for them? 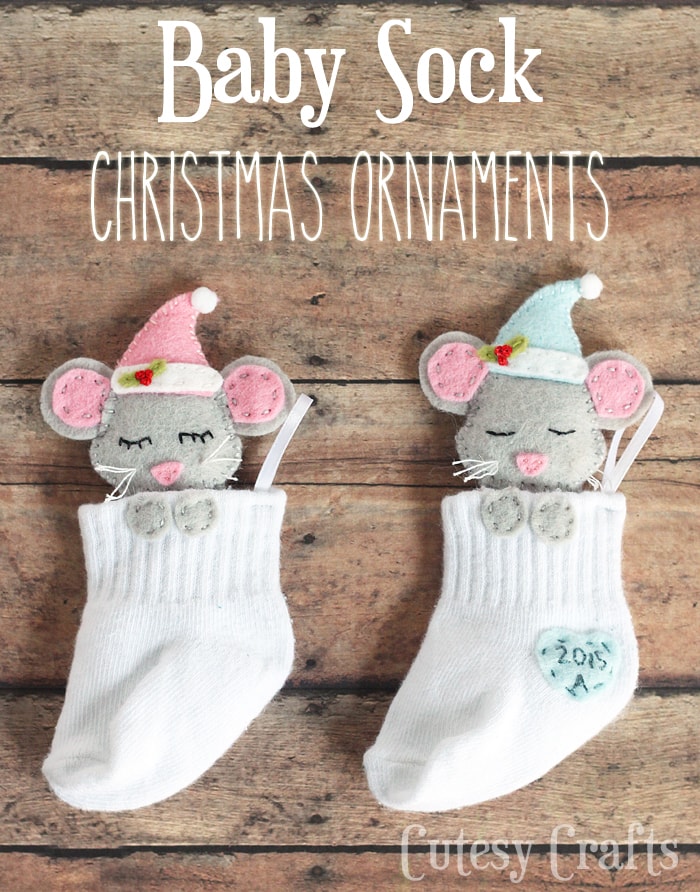 I provided a pattern for a little stocking to put the mouse in if you don’t have a baby sock sitting around.  You can make it pink or blue for a baby or another color just as a cute mouse ornament.  There’s a video at the top of this post to show you step-by-step how to make the ornament.  It’s a little long, but you can just skip to the parts that you need help with.  If you are using an ad blocker, you may need to turn it off to watch it. 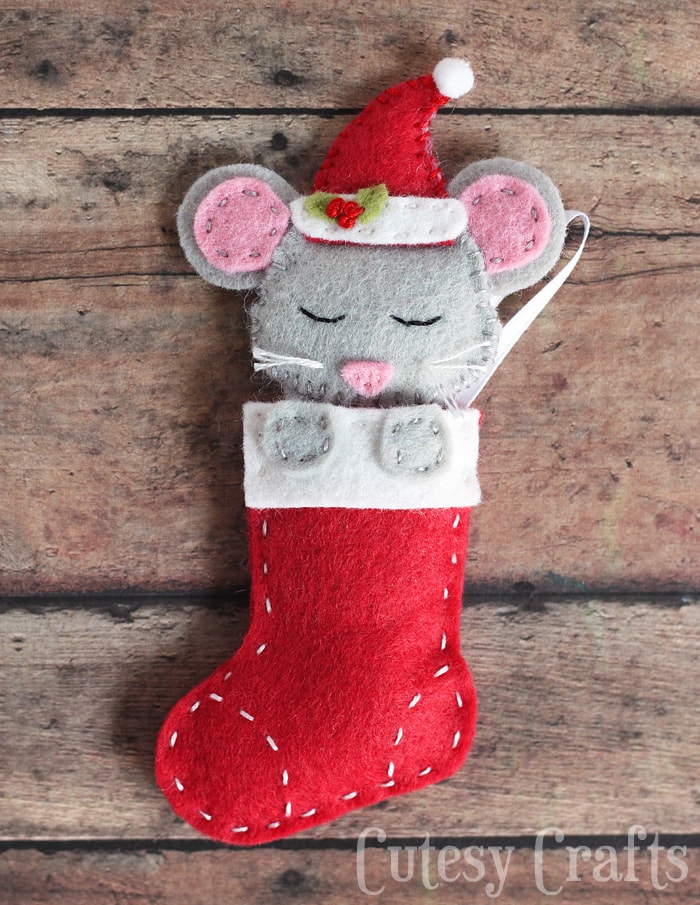 Cut out all of the pattern pieces.  Embroider the mouse’s face and sew on the nose.  Use a running stitch to sew on the inside of the ears.  Sew a whip stitch around the body pieces to attach them together, leaving the top open.  Put the white cuff piece on top of a hat piece and sew a running stitch across the top only, using two strands of floss. 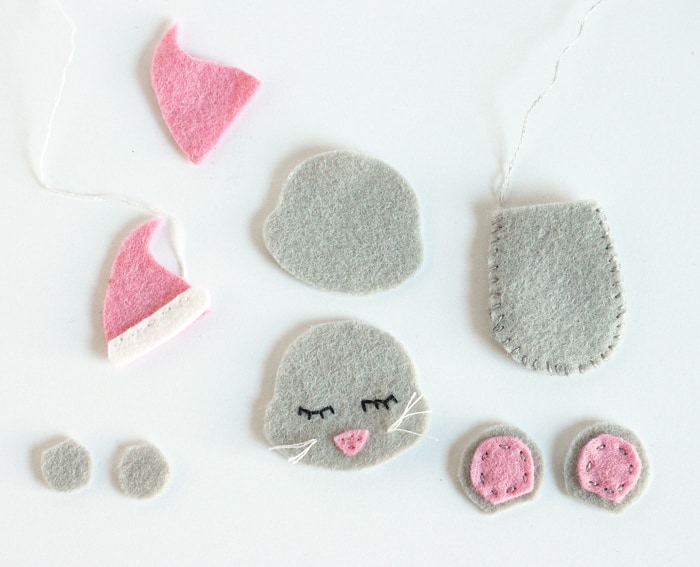 To make the whiskers, tie a knot at the end of four strands of floss, and bring it through to the front.  Trim them to the length that you want. 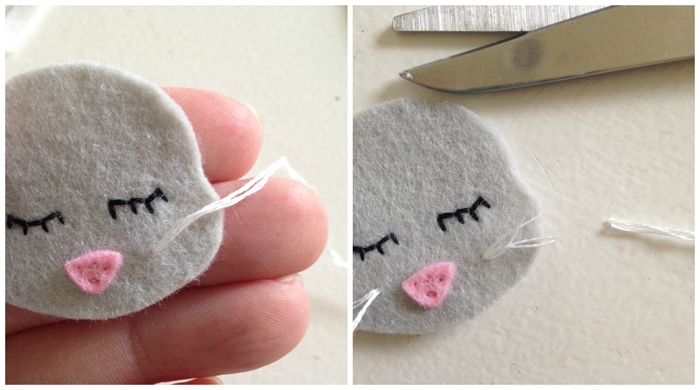 Sew around the rest of the white cuff while attaching the hat to the mouse’s head.  Sew the leaves on the hat.  Add the berries by making french knots with four strands of embroidery floss. 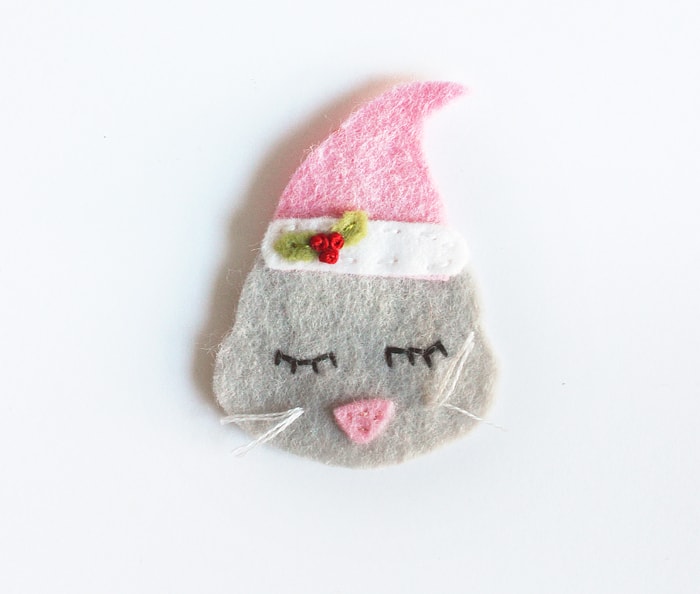 Sandwich the ears in between the front and back of the head.  Whip stitch around the mouse’s head, leaving enough space to attach the body later. 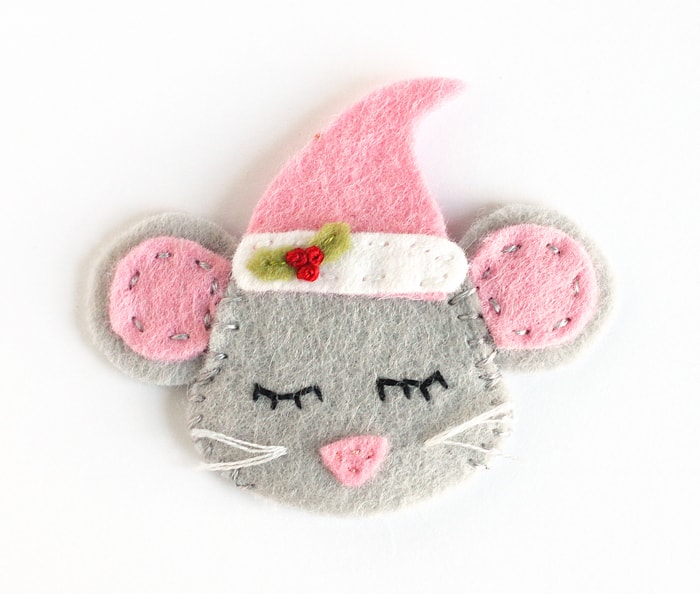 Stuff the head and body with some fiberfill. 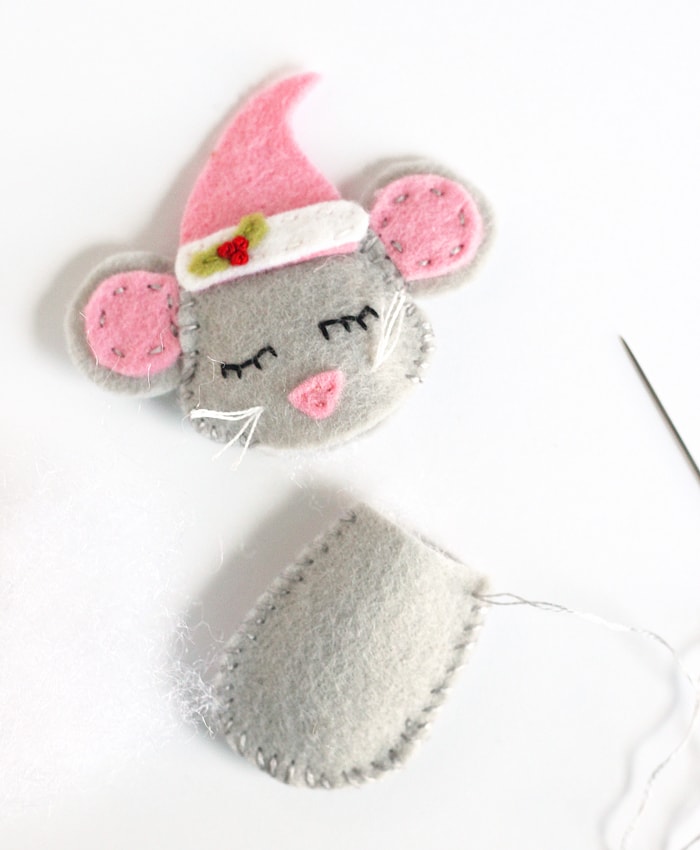 Tuck the body into the head and sew them together. 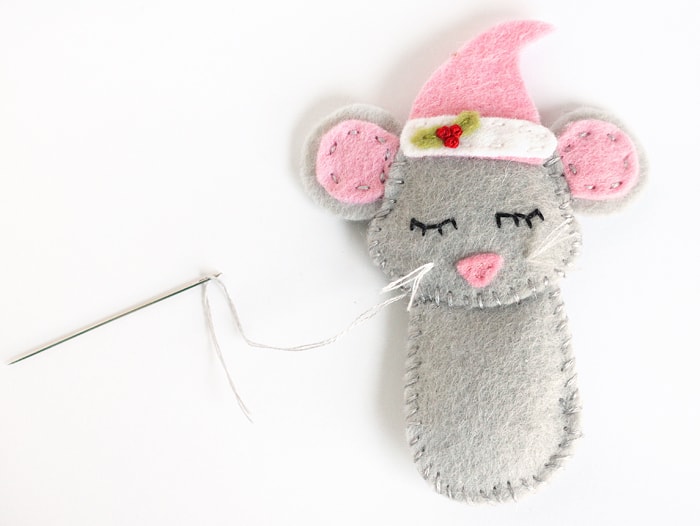 Sew the back piece of the hat on and stuff with a little more fiberfill. 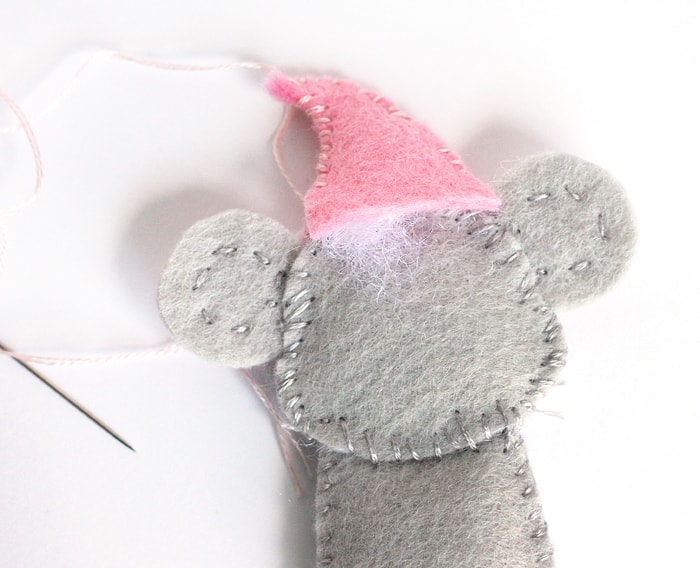 Sew a pom-pom to the top of the hat.  The pattern also has a little circle if you’d rather cut one out of felt. 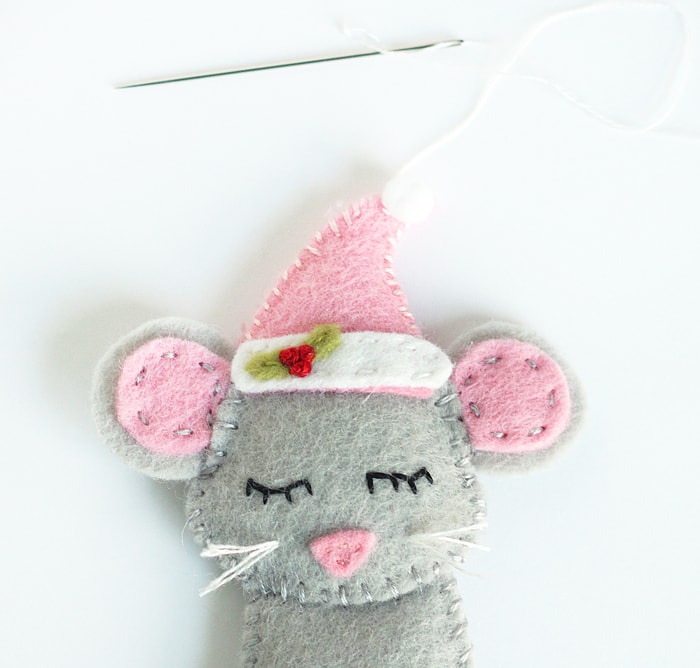 Sew the little hands to the top of the sock.  I cut a little heart out of felt and embroidered the year and an “A” for Austin on it.  Much easier to stitch the heart on rather than embroider directly onto the sock. 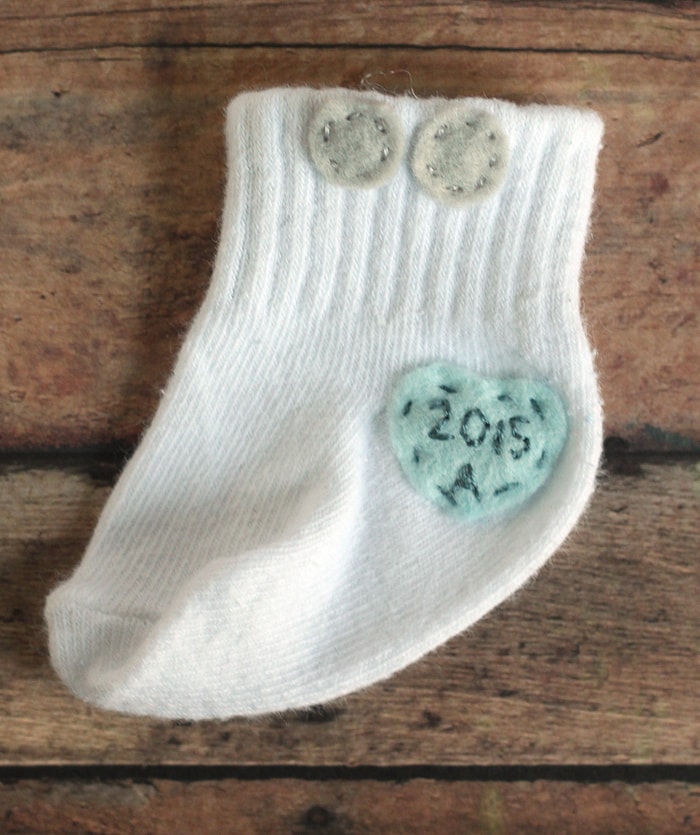 Sew a loop of ribbon to the top of the sock for hanging.  I used my sewing machine to make sure it was secure.  Add just a little bit of stuffing to the inside of the sock to keep it from being too floppy, and put the little mouse inside. 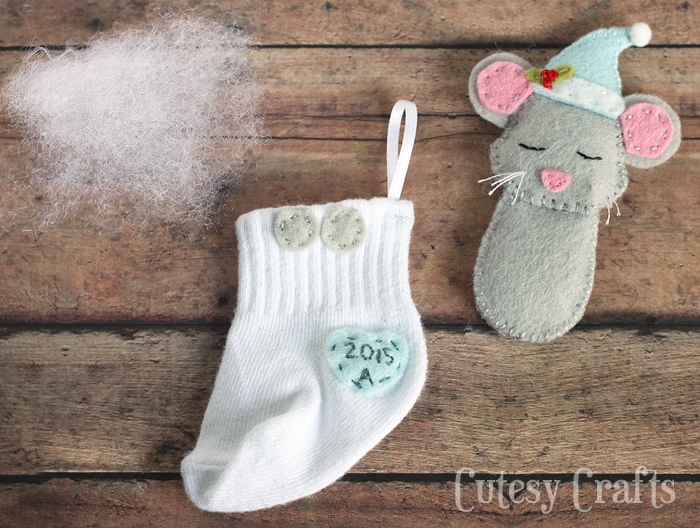 Add a few stitches to secure the mouse in the sock, and you’re done! 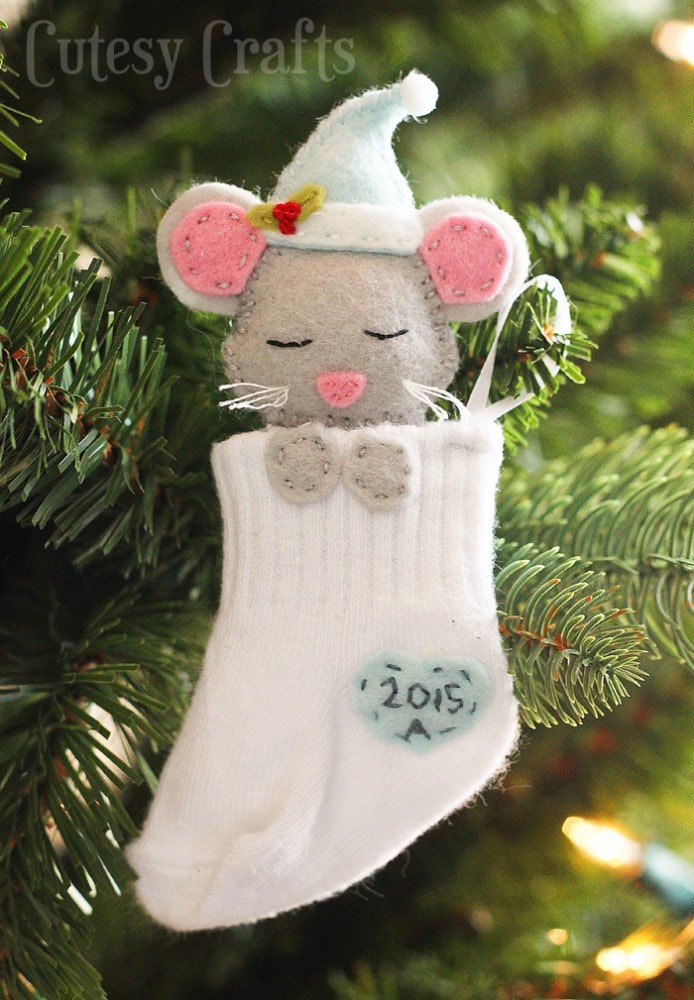 Aren’t the sleepy little mice so cute?  I kind of love them! 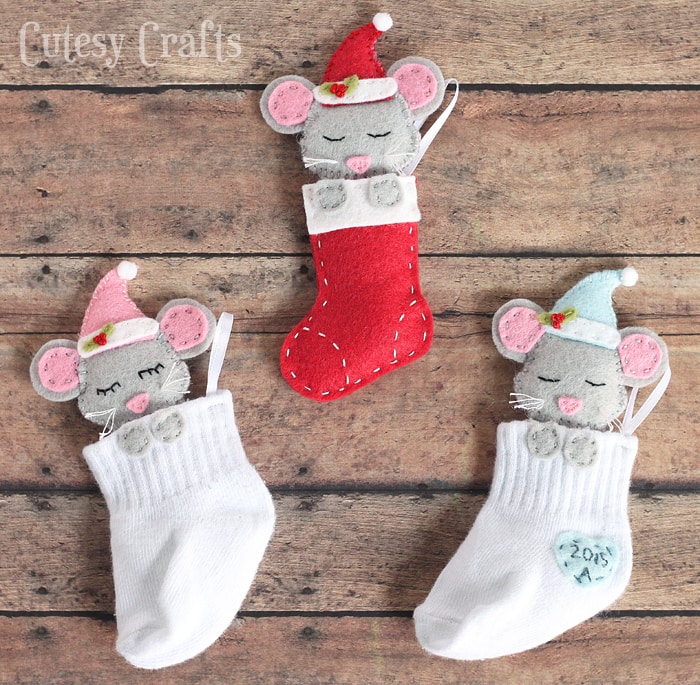 Get the free pattern!
To download the free pattern, enter your information in the form below or click here to subscribe to my newsletter. It’s free, and I’ll keep your email address safe. You can also unsubscribe at any time. 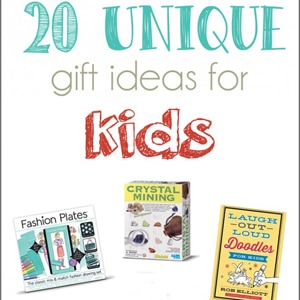 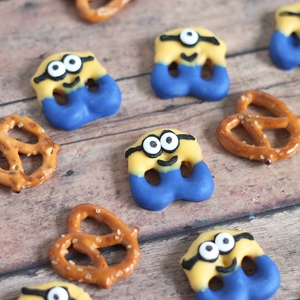 What a lovely craft for my grandkids. I know the older ones will enjoy them just as much, with date that they were born. Thank you so much.

I would like to make the mouse in the sock, however I can not get the pattern, I subscribed. what do I do now?

You should have gotten an email after you confirmed with a link to the download page. Send me and email at cutesycrafts@hotmail.com if you didn't get it.

Thank you for such a cute pattern. This is perfect for my friends new little ones first Christmas.

So glad you like it! I'm publishing a step-by-step video tomorrow if you need a little help assembling it. :)

i WOULD LOVE TO HAVE A COPY OF THE BABY SOCK/MOUSE. i WILL DEFINITELY FOLLOW YOU. i THINK MY FRANDDAUGHTERS WOULD LIKE THESE CRAFTS'

So glad you like the ornament! Were you able to download the pattern from the link? If not, send me an email, and I can get it to you.