I just got a new assignment at church in our women’s organization, called Relief Society.  As part of that calling, I am responsible for planning a monthly Relief Society activity.  This month, we decided to have a little “getting to know you” Valentine’s Day party.  The theme was “Love One Another”.  Just a chance for everyone to find out more about each other, and have a little bit of fun.  I put myself in charge of games.  These games can be used for other Valentine’s Day parties as well though.  You can even use the ideas and change the questions for your age group.  For a kid’s version of the conversation hearts game go here. 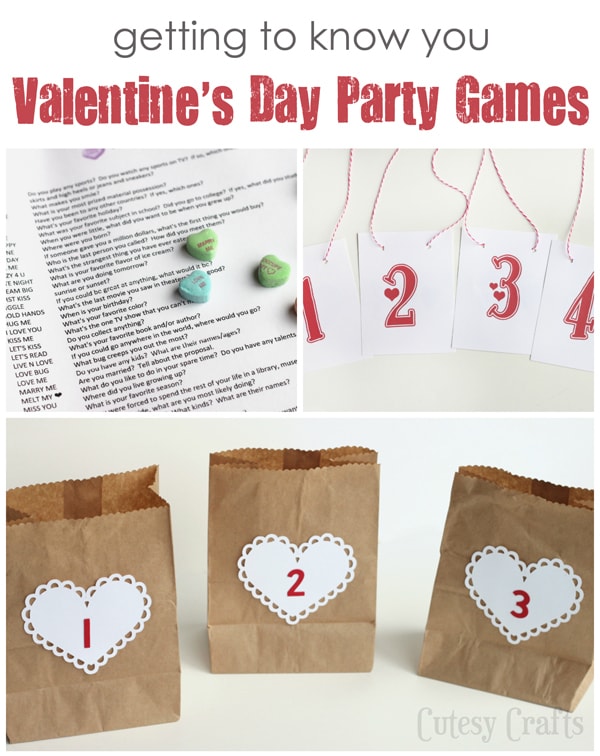 Printables for all of the activities can be found here.  I only made numbers up to 32, but I used the font True Stories if you want to make more.

Conversation Hearts Game
This game and the next game were played simultaneously.  We had dinner, so everyone was sitting at different tables in the room.  I gave each table a bowl of conversation hearts and a printout with different things that the hearts say and corresponding “getting to know you” questions.  Each person takes a turn picking a conversation heart out of the bowl, reads what it says, finds it on the list, and then answers the question that goes with it.  So if you drew “LOVE ME” you would  answer the question, “Do you have any kids? What are their names/ages?” then pass the bowl to the next person.  Everyone seemed to have a really fun time answering the questions.  (For the kid’s version of this game go here.) 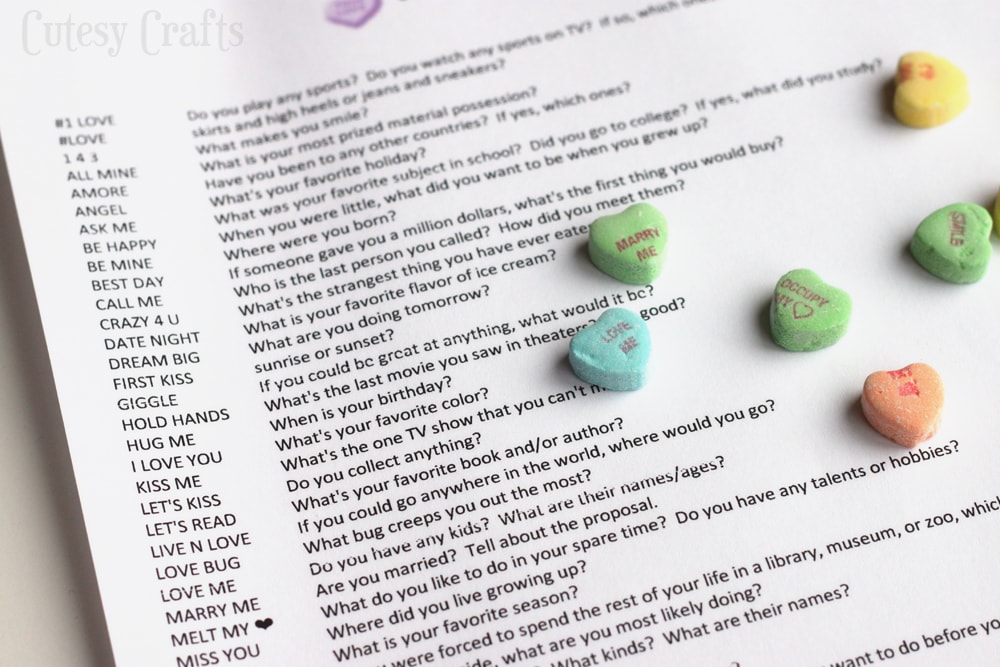 Heart Attack Game
Now I just needed to take care of the problem that everyone was sitting at separate tables.  Before we started the conversation heart game, I gave everyone a tag to wear around their necks.  There were four kinds of tags, “heart breakers”, “lovebirds”, “sweethearts”, and “love bugs”.  Make sure to alternate them when you pass them out so you don’t have a whole table of “heart breakers” or something.  Explain that every couple of minutes you will be calling out a name for one type of tag.  Everyone who is wearing that kind of tag has to get up and move to another table.  If you call out “heart attack” everyone has to get up and move.  They continue to play the conversation heart game after moving to their new table. 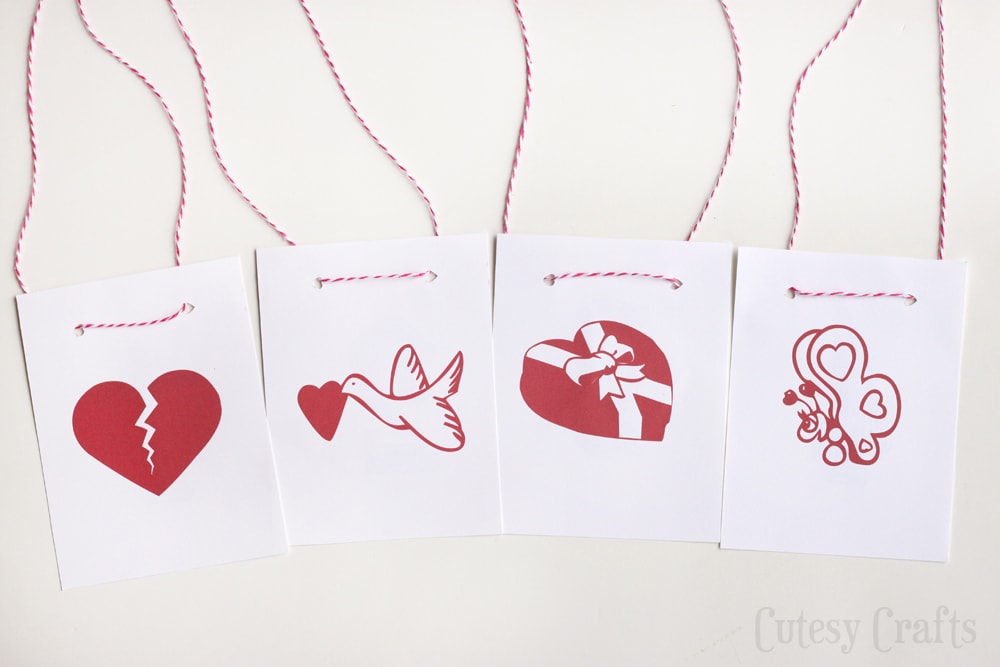 Anonymous Compliments Game
The tags that I made were two-sided.  For this last game, everyone turned their tag over to the side that had a number printed on it.  Every person at the party should have a different number.  I planned for 32, so there were 32 numbers.  I had a mini freak out when we realized there were 38 people there, but thankfully my friend Savanna was there to whip up some extra tags for me.  Thanks Savanna, you saved the day! 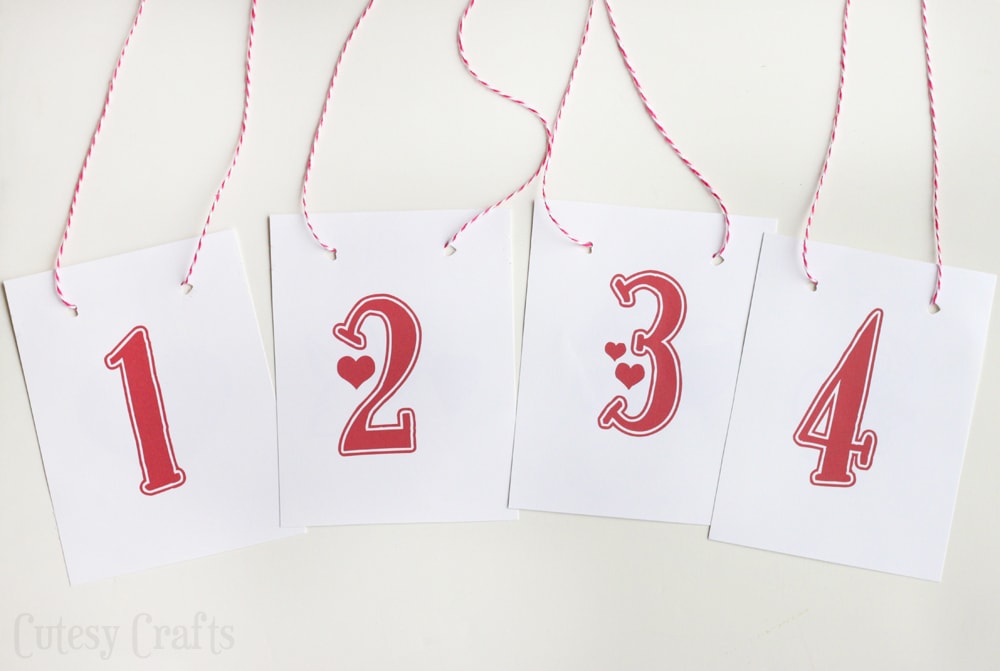 Everyone got printouts with each of the numbers listed on them (two pages for each person).  Every number on the paper represented the person in the room with the matching tag.  You had to go around and write one anonymous compliment about each person next to their number.  It could be something simple like “I like your hair” or something more thoughtful.  This was great!  It got everyone out of their chairs and really figuring out who everyone was. 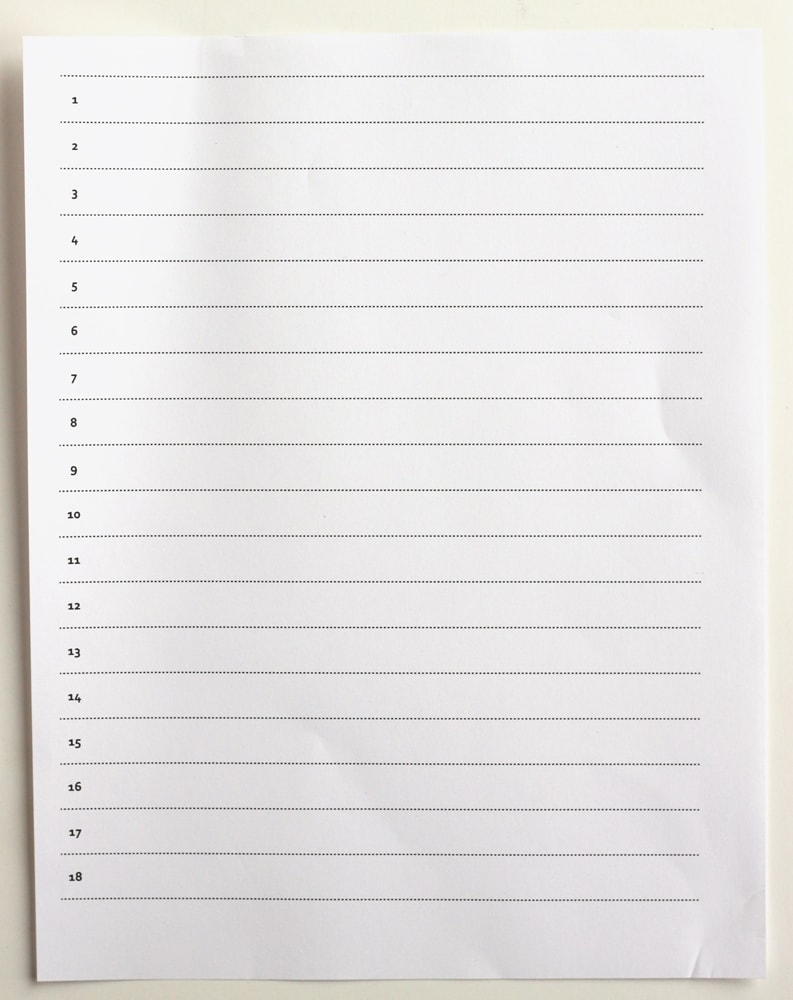 When they were done, we cut the papers into strips and sorted them into cute bags with their corresponding numbers on them.  In my head, the paper cutting went a lot faster.  However, 38 people made for a lot of cutting to do, and we only had two paper cutters.  If I were to do it again, I’d just pass some scissors around so everyone could cut their own sheets.  Next time.

For the bags: To keep things cheap, I used some scalloped scissors to cut the tops off of some brown lunch bags (I cut off about 4 inches).  I used my Silhouette to cut out the hearts and numbers.  I had all of them set up on a long game/dessert table. 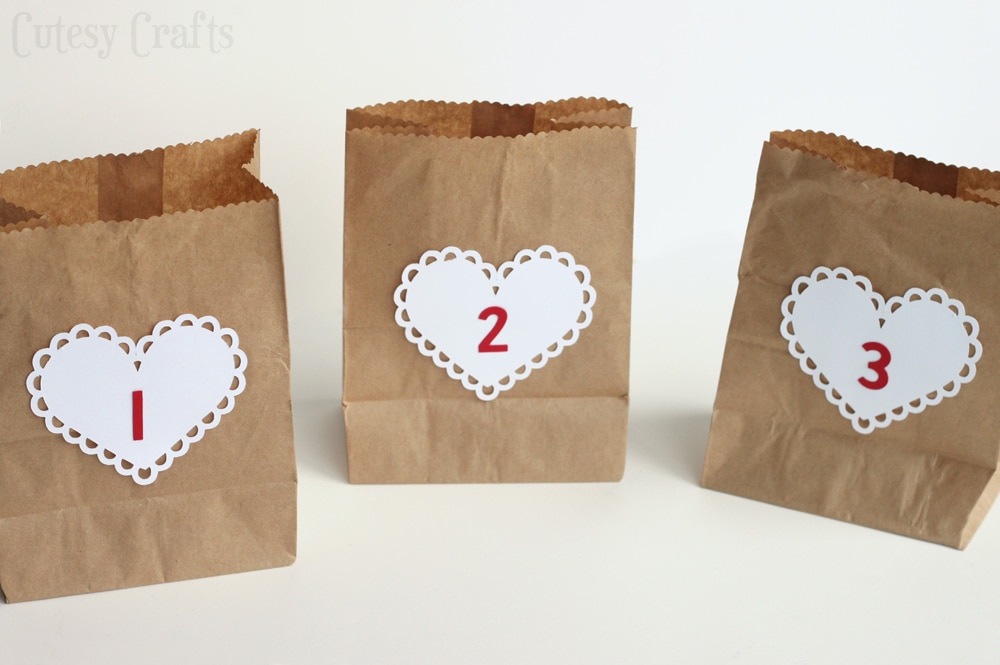 Everyone went home with a bag full of “valentines”.  If you can’t tell, these ones aren’t mine.  Unfortunately I do not have a “skinny body”, nor am I “sooo beautiful (in a bathing suit).”  LOL!  My friend Jennifer posted this on Facebook after the activity, and gave me permission to use her photo.  Thanks Jennifer!  My compliments weren’t as pretty since I was last and they had to add an extra row for me on the paper.  They were mostly about me being crafty and having a nice smile. 🙂 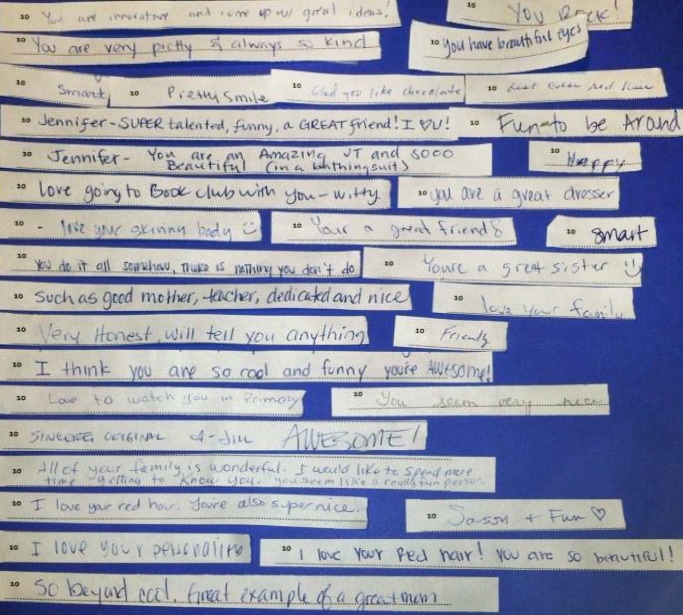 Overall, a great activity if I do say so myself!  Everyone seemed to really love getting all of the compliment “Valentines” and really got to know each other better.  Wish me luck in my new calling! 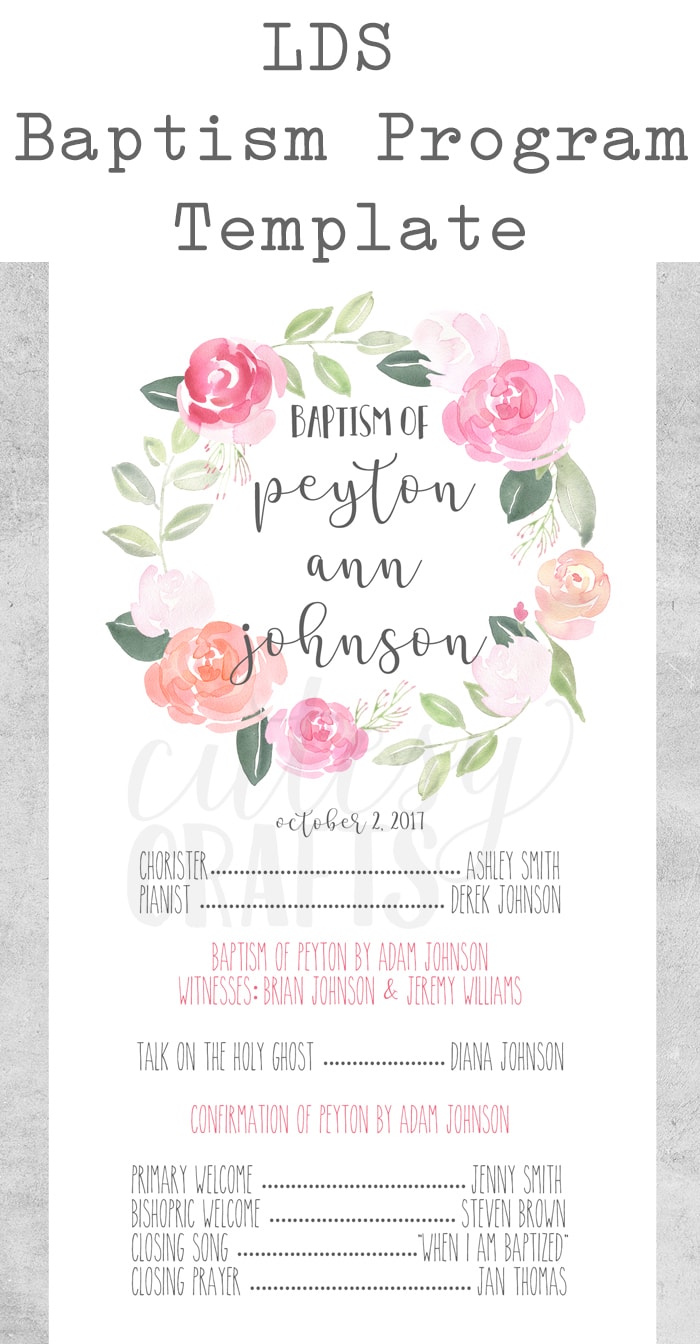 Do you happen to have an invitation you handed out to go with this activity...love one another I love these ideas. Thanks for sharing

I think someone else in our ward made the invitations, and it was a while ago. Sorry!

Thank you for this great idea and printables. I will be sure to use this one!

Thank you for sharing. I love these games! Your ministry is SUCH a BLESSING!!!!

We are doing this activity at our church building next week. I wondered if you have the conversation hearts document in other than a pdf format? I may need to make changes to what the hearts say based on the hearts I end up purchasing. Thank you so much for all of these great ideas.

I have the same question as Jessica. Is there a way to get a editable version of the conversation hearts document? I love love love this and am planning on doing this activity in February with our Relief Society. Thank you so much for sharing.

Did you have a message that went along with it or it was just simply this activity? Iam planning on doing this activity for the sister in my YSA ward and the relief society president got onto me saying we need to tie in a message so I was courious to know if u had one at all?? Love this idea it's super cute!!!

I didn't have a message per say, but the theme was "Love One Another". You could go along those lines and find something to talk about for sure. My main goal was to get the sisters to mingle and go outside of the cliques and comfort zones.