I’ve got one last Christmas craft for you all before I take a bit of a break.  I promised myself to take it easy in January, so if you don’t see much of me, that’s why.  I’ve wanted one of those Little People Nativity Sets for a while now, but just can’t stomach the price.  I decided to make my own fabric version for the kids.  You know me…if I can make it for less money, I will.  Ok, so maybe it’s not as cute, but it serves its purpose to help remind the kids what Christmas is really about. 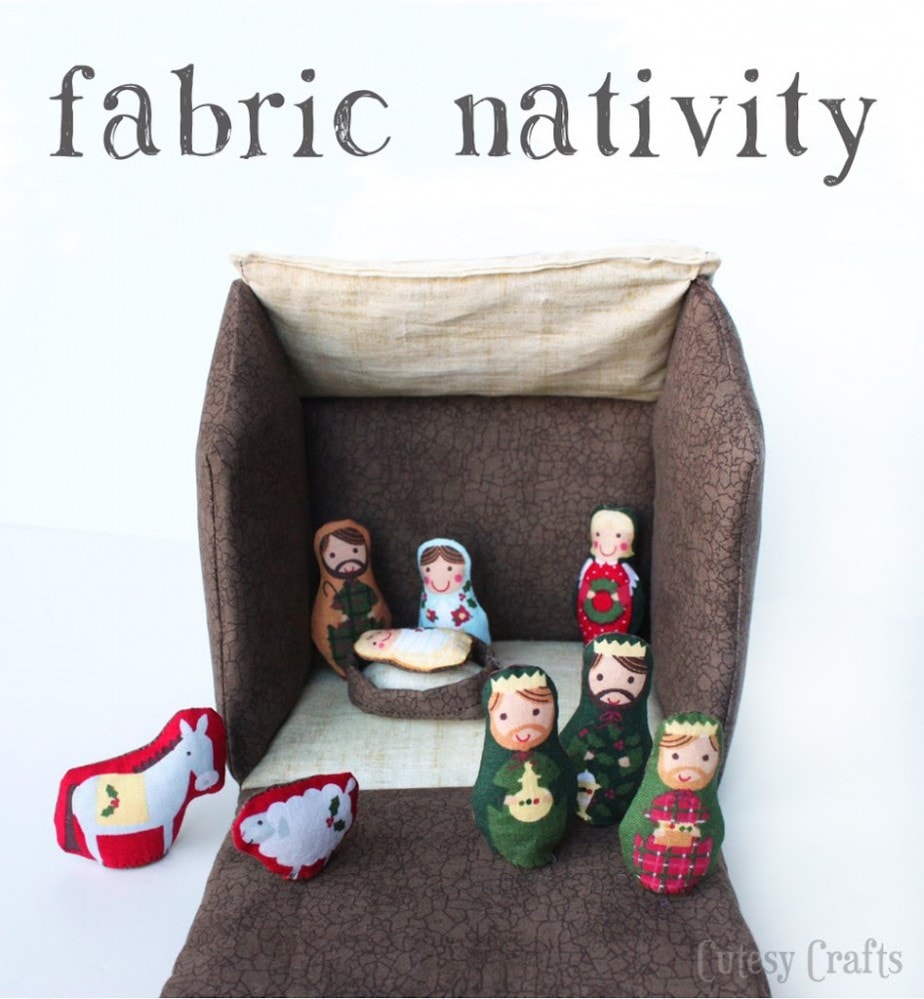 This idea came from a post on Capturing Joy.  Kristen used this fabric to make some adorable nativity ornaments.  Go check them out!  The fabric is from Joann’s, but is sold out online.  I called around to my local stores and found some in stock.  Yay!  You might also be able to find someone else re-selling it online. 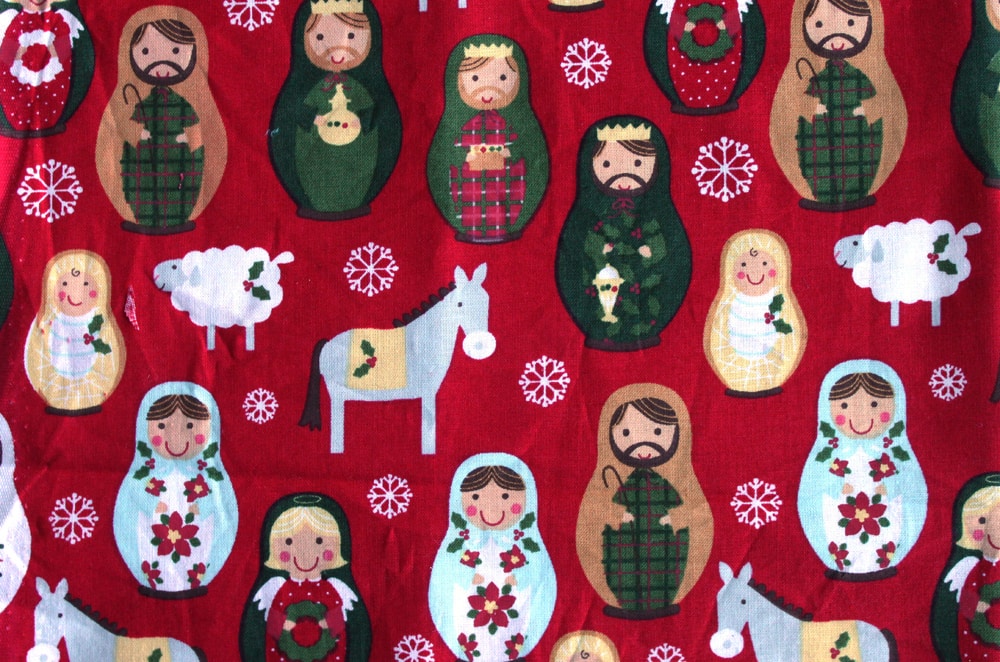 I made the little house/stable from this tutorial on U.K. lass in U.S.  I used velcro instead of buttons and didn’t make a handle.  Oh, and I also used cut up cereal boxes instead of plastic canvas.  Haha!  It’s holding up just fine so far.  Leah even stepped on it, and we’re still good! 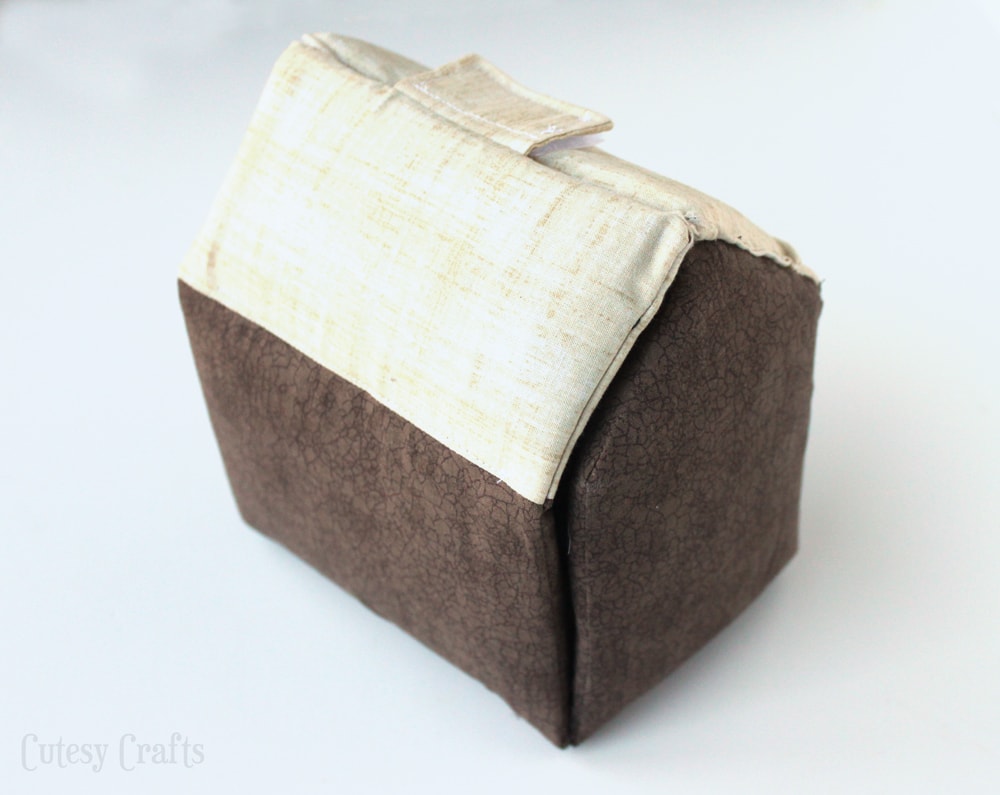 To make each of the little figures, cut out the fabric leaving about 1/4 inch around each one.  Put the figure, face down on the front of another fabric and cut the outline.  I just used the same brown that was for the stable walls. 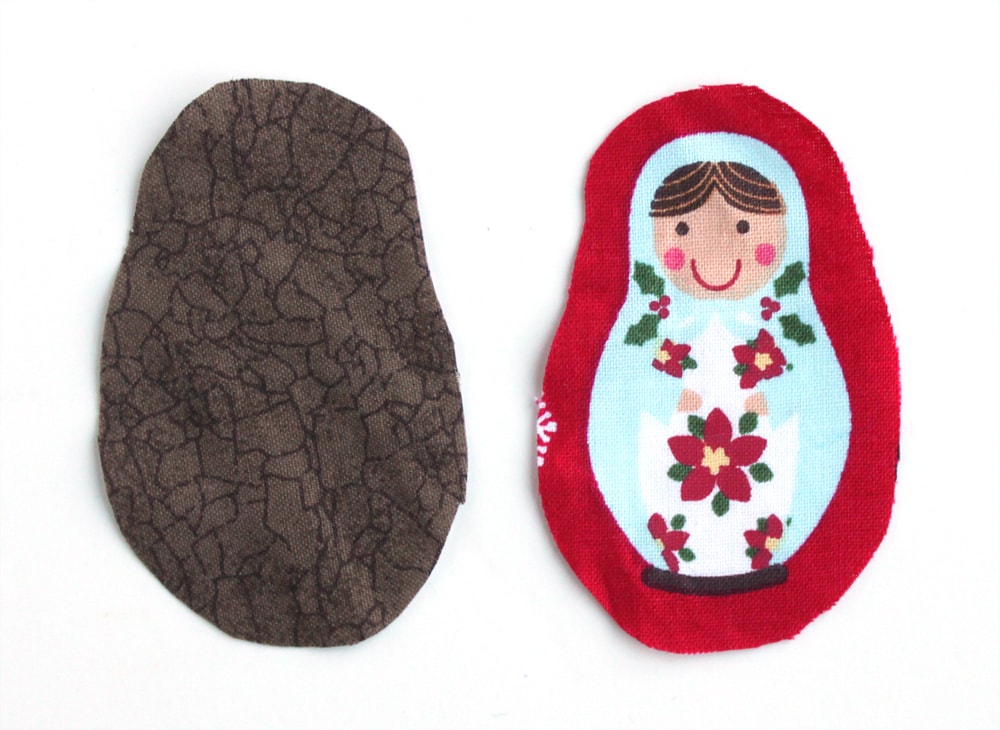 Put the two pieces right-sides-together and sew around the outside of the figure.  Leave an opening at the bottom just like I did in the photo below. 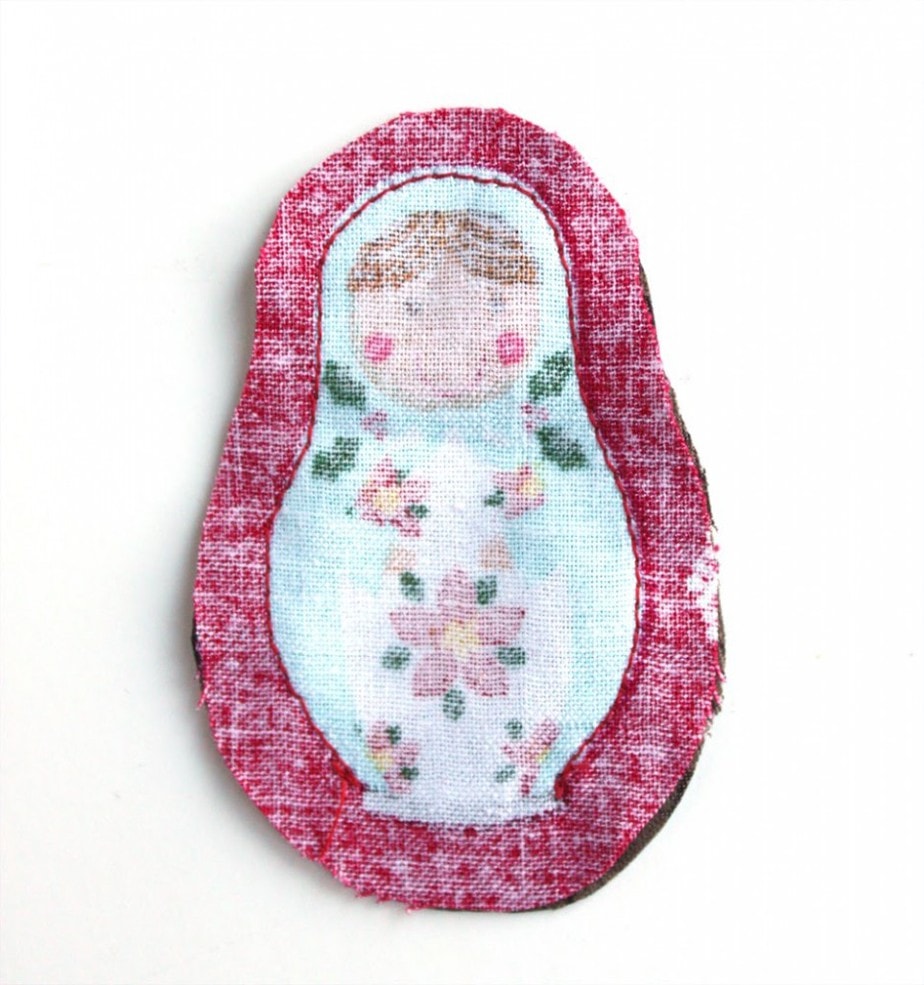 Snip around the figure making sure not to cut through your thread. 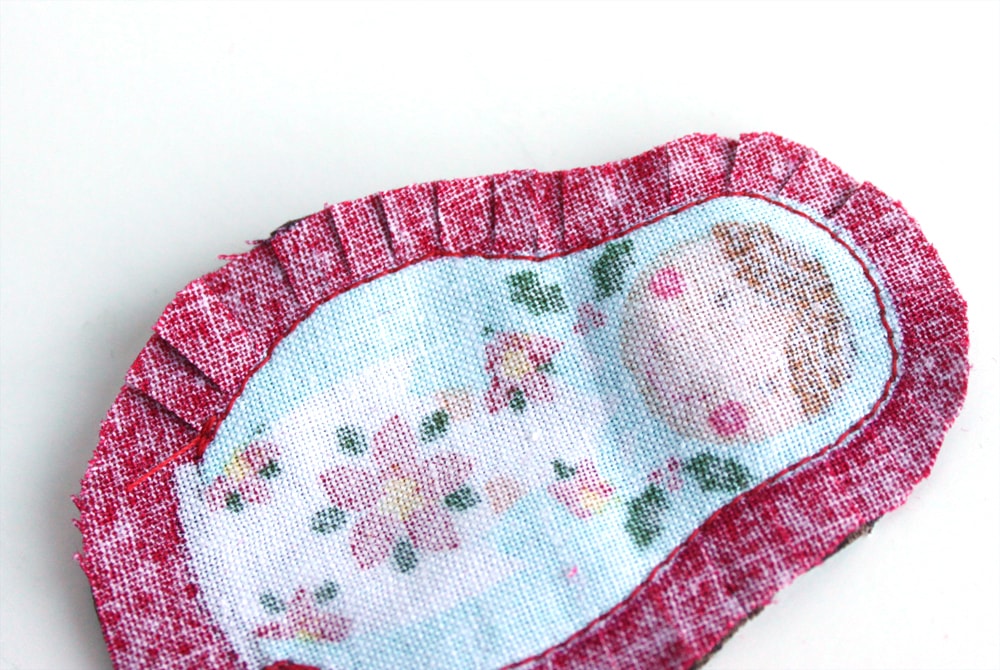 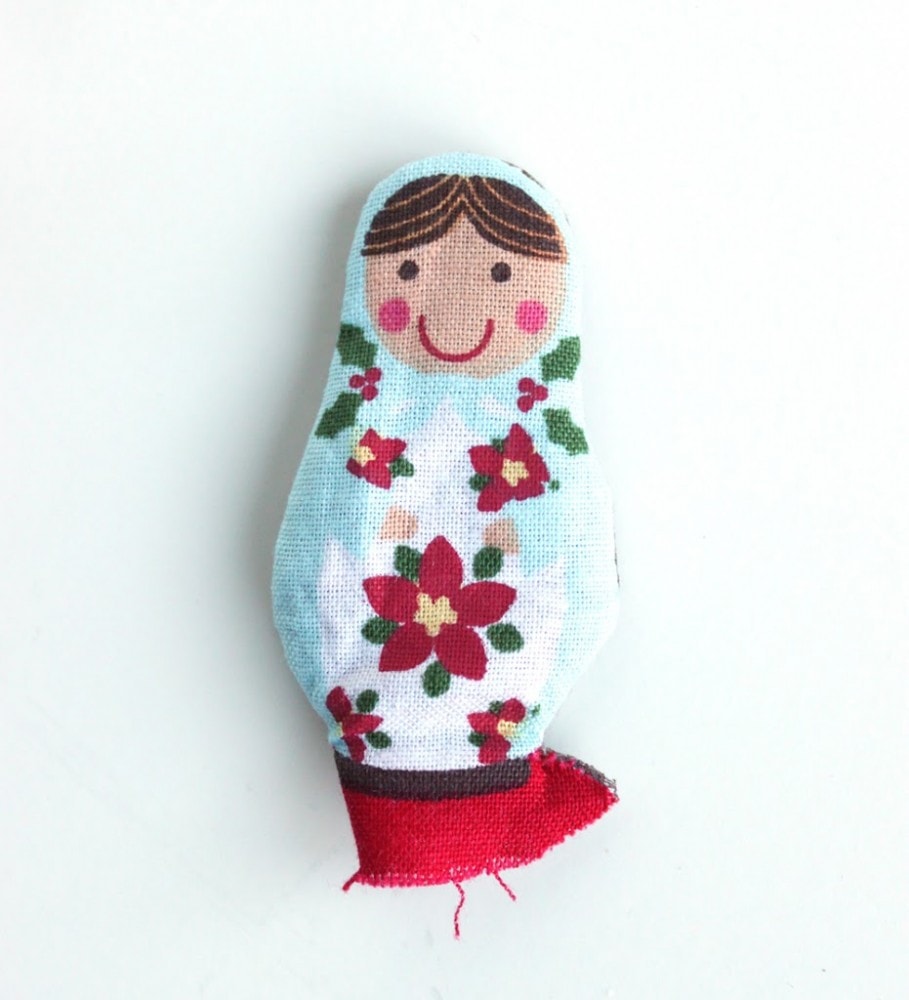 Tuck in the bottom fabric and iron everything flat. 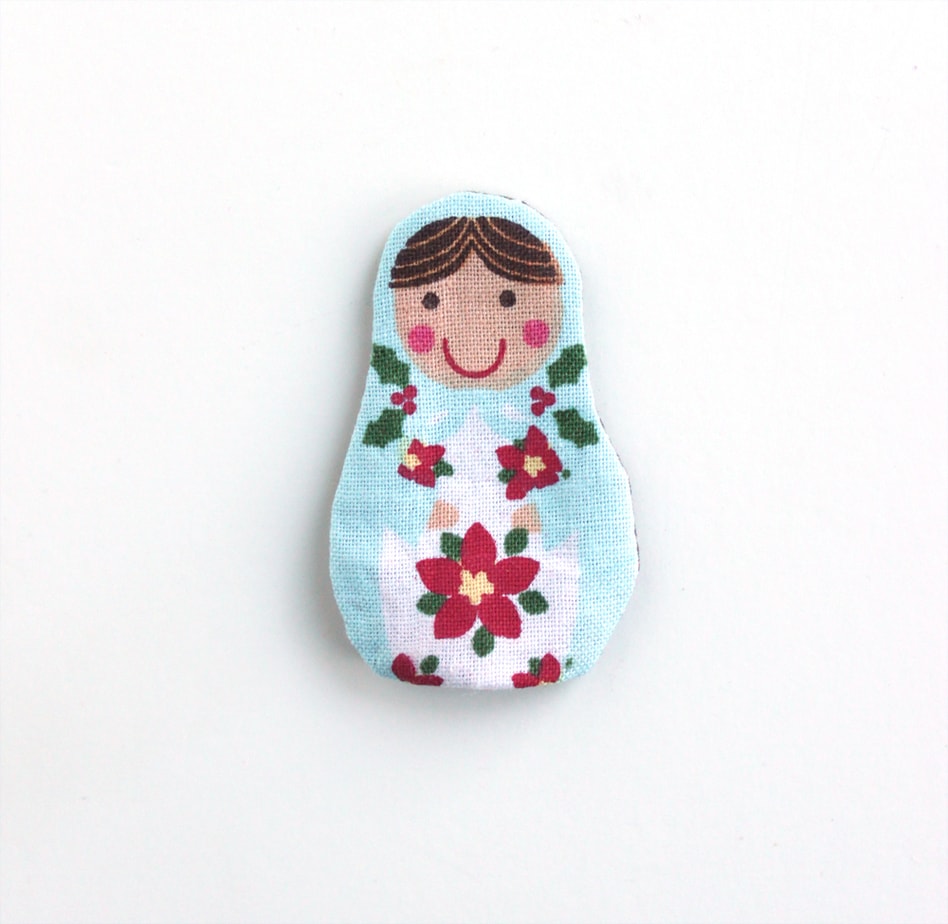 Fill the figure with stuffing and then whip stitch a little oval of felt onto the bottom.  Just make sure the the bottom is nice and even so the figure can stand up when you are done.  If I had to do it again, I probably would have put something inside to weigh down the bottom.  They fall over kind of easily.  The kids don’t mind though. 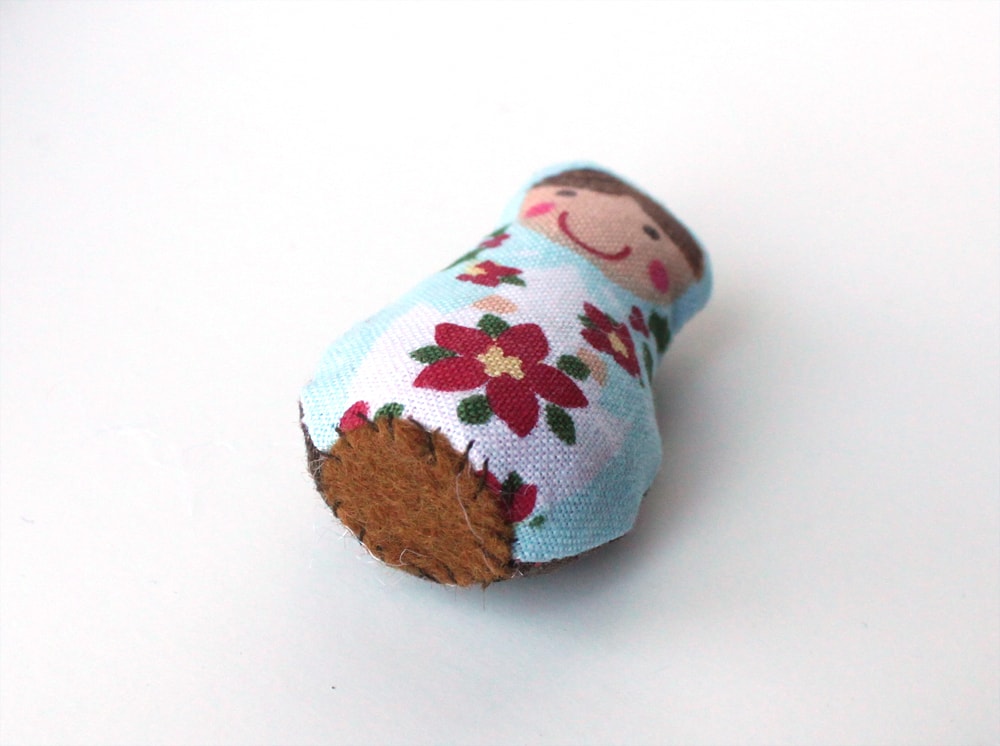 I didn’t put a base on Baby Jesus since he wasn’t going to be standing.  I just hand stitched the bottom shut.  I did, however, make him a little manger to sleep in. 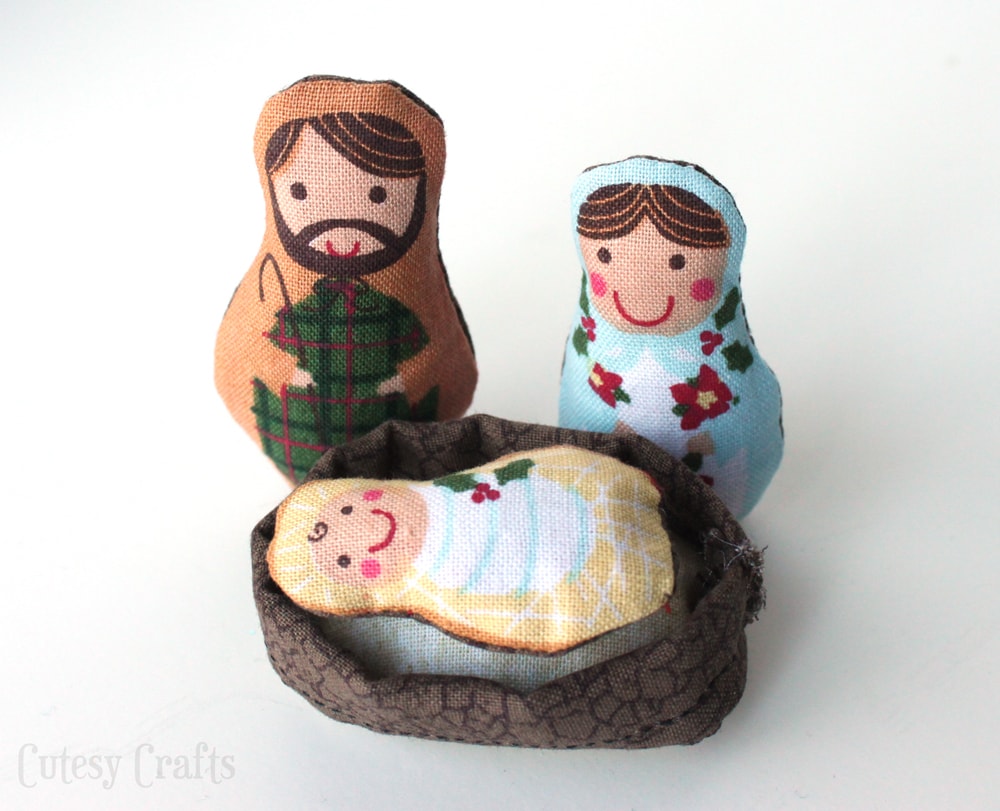 I was just kinda messing around when I made it, but I’ll do my best to explain.  Cut two ovals a bit bigger than Baby Jesus. 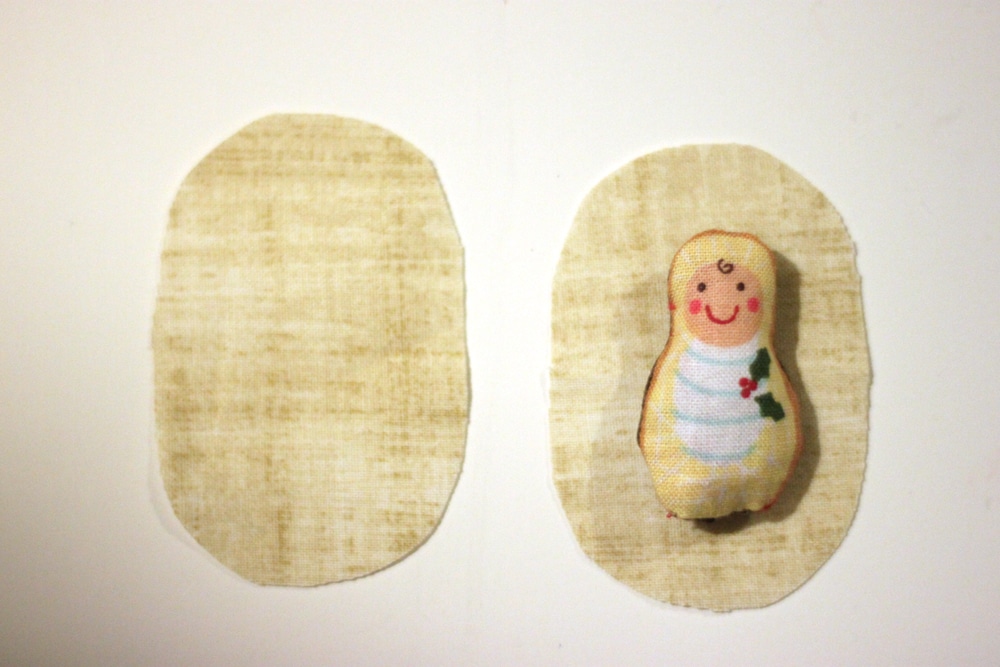 Sew them together and stuff just like you did with the figures.  Sew the opening closed. 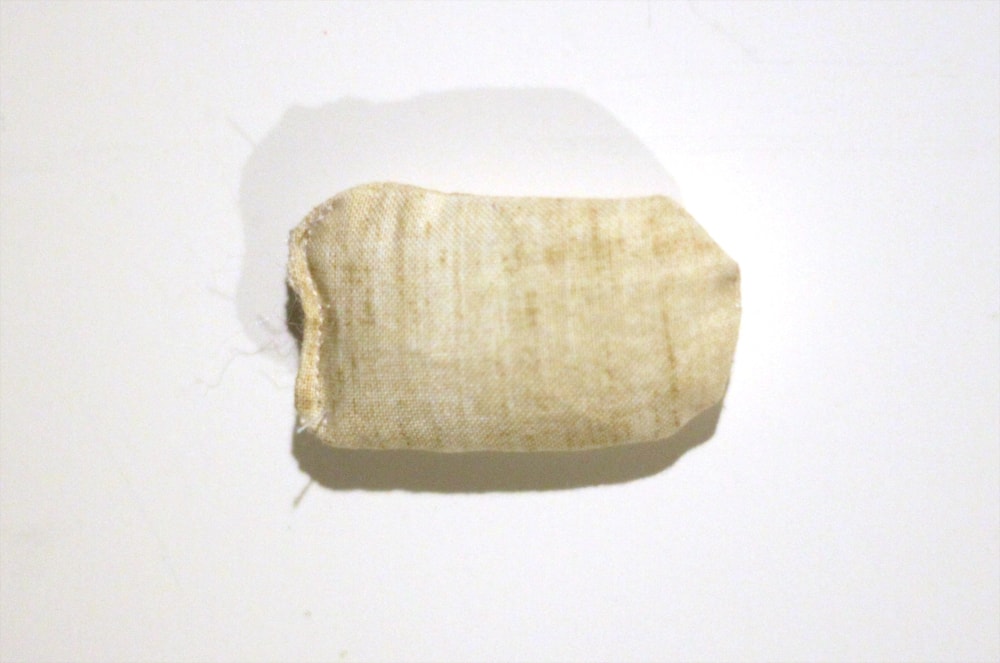 Cut a rectangle-ish piece of your brown fabric and roll it up like a carpet.  Told you I was just messing around! 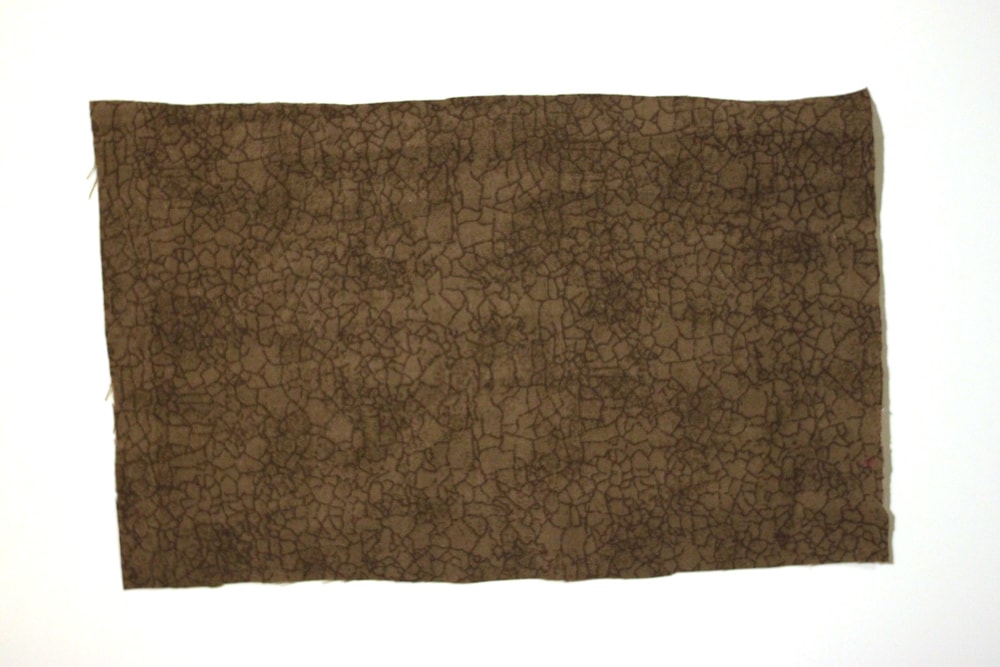 Tuck in the end and sew down the length of it. 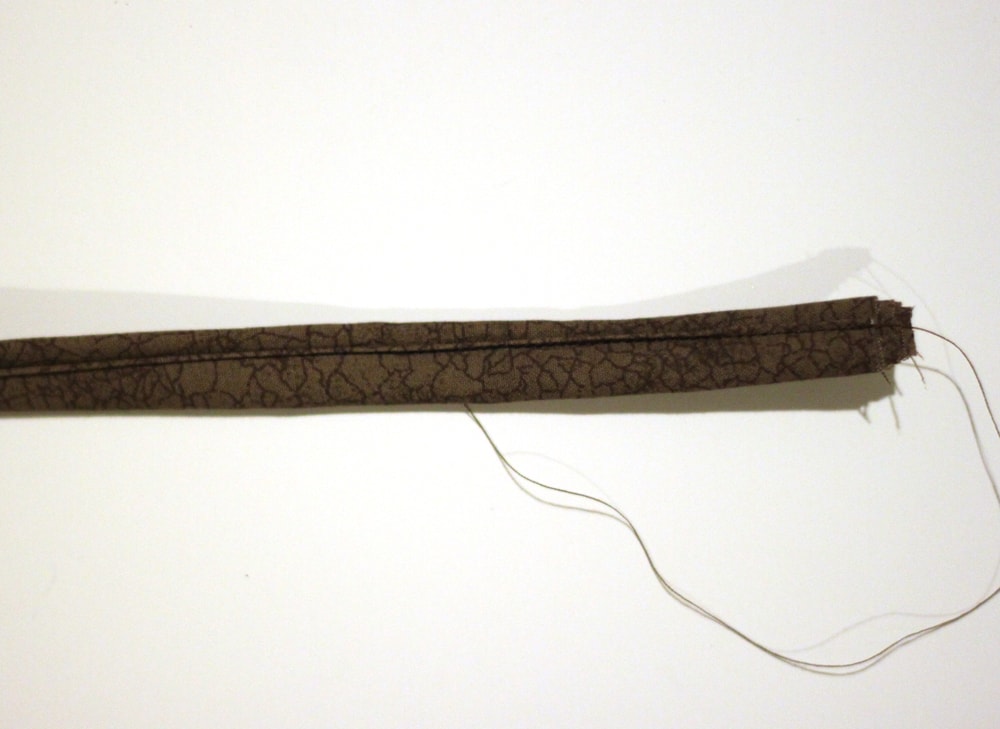 Wrap it around the bed and hand stitch it on. 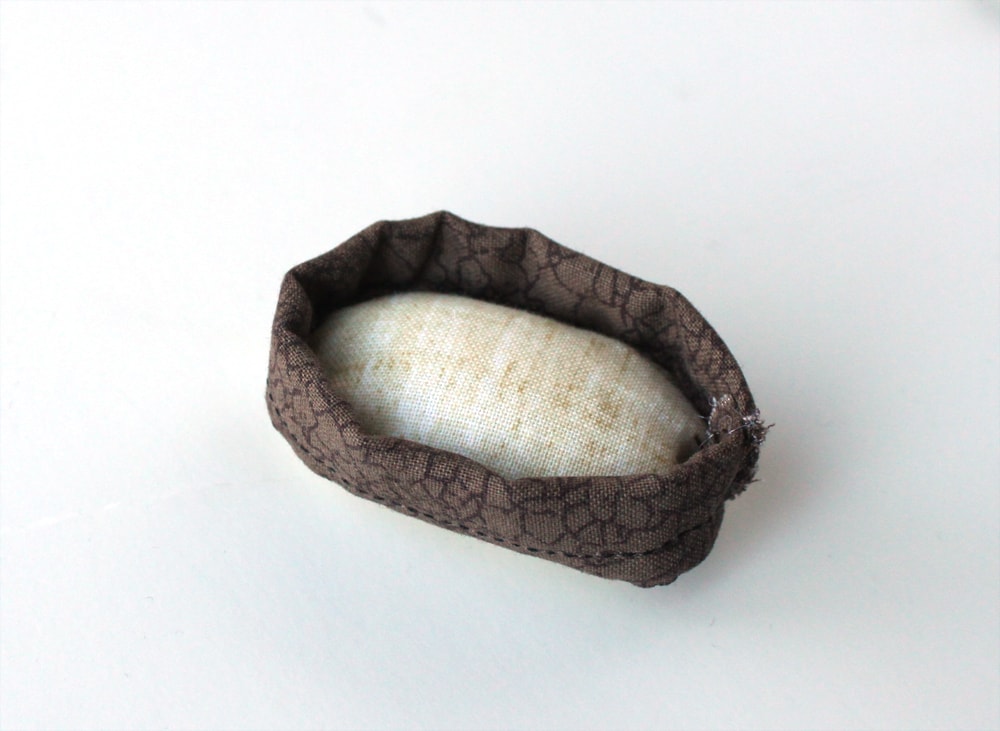 I kinda love it! 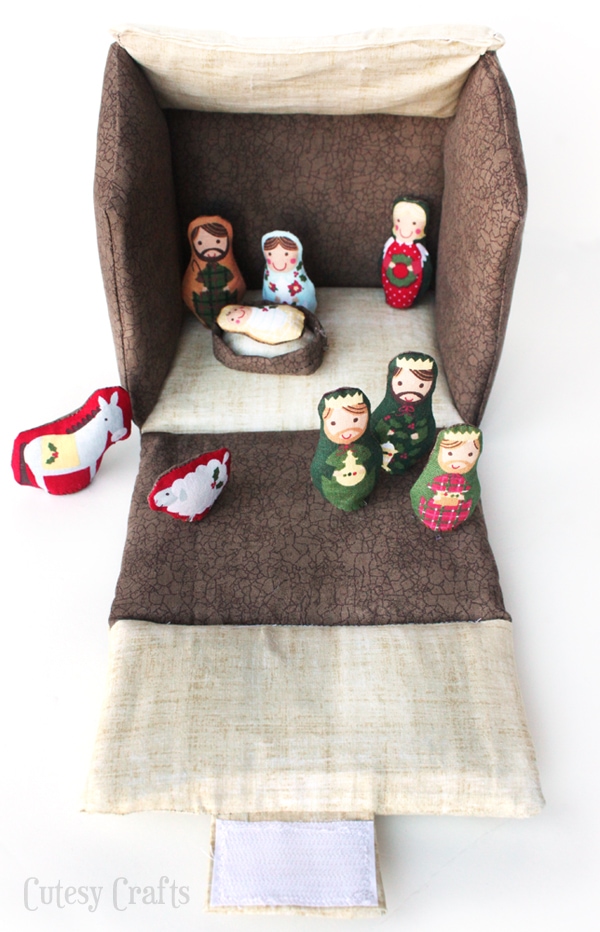 The kids… I mean, the princesses are having a great time playing with it!  Oh yes, and they decided that Bethlehem needed street lights from the train table.  Haha! 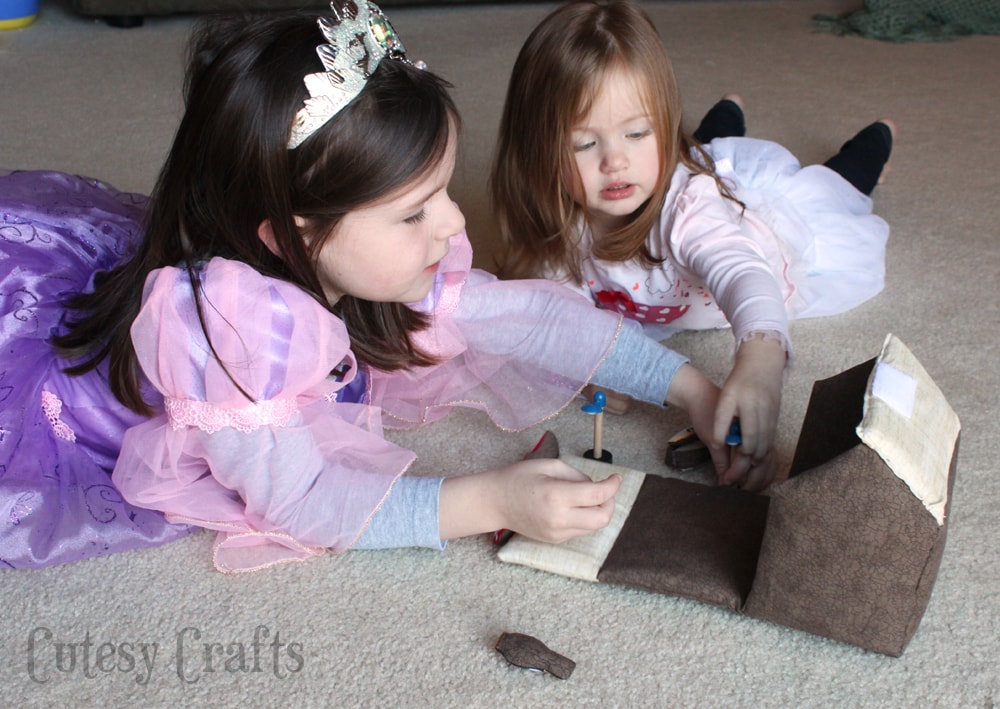 I’m posting this as a part of Nap-Time Creations’ series, A Crafty Christmas.  The theme for this week is “Christ-Centered Christmas”.  Go check out her blog for more “Christ-Centered” ideas.  A nice little reminder to focus on the true meaning of Christmas. 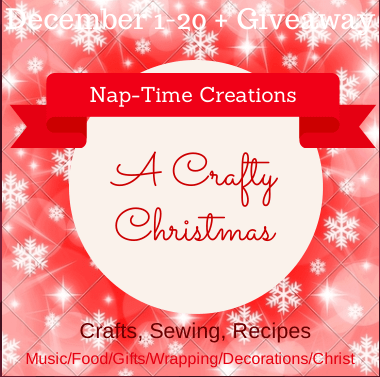 I hope all of you have a really great Christmas!  It’s been a great year for me and my little blog.  Thank you so much for reading and see you in 2014!

I would like to make this nativity (different figures since I can't find the fabric near me).

I cannot access the website for the house instructions. I get a notice saying I need to be invited. I don't know how to reach the UK lass to ask for permission.

Would you be able to assist me with this? Thank you in advance.

Oh, she must have shut down her blog or something. I don't remember how to make it, but maybe you can find something similar online.

This is super cute! Hope your holidays were great. Stopping by from Twitter thanks for the follow. Looking forward to connecting. Feel free to join in my weekly parties anytime. Happy New Year. Theresa @DearCreatives

Thanks Theresa! I'll be over to check out your blog!

oh Jessica!!! That is adorable!! PERFECT for the series and just great for kids! I will have to look for that fabric... Pinning!!! Emily

Thanks Emily! I think I spotted some on Etsy and Ebay. More expensive than in the store, of course!